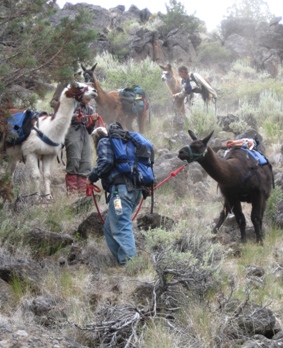 In September of 1994 several Western Idaho Llama Association (WILA) members were helping Wes Holmquist set up for his first annual pack llama race and Classic 2000 sale in Boise. The race was held in the foothills near Boise, Idaho and consisted of a 2000 foot elevation gain covering 5 miles while carrying 25 percent of the llama's body weight. This was followed by a 2 mile obstacle course carrying 30 percent of body weight, which was held at the Western Idaho Fairgrounds. There was a cash prize for the top finishers and llamas being sold as trained packers had to complete the course. Everyone agreed that this was a good way to determine if a sale animal was really a pack llama. Jay Rais and Dick Sheehan began talking about Dick's past experience with hunting retriever trials and the way that hunting retrievers were tested against a standard rather than competing against each other. By testing against a written standard, the Hunting Retriever Trials were promoting dogs that still had good hunting instincts.

In November of 1994 the WILA Packing Committee began to meet and try to formulate what a written standard for pack llamas should look like. It was decided that WILA would follow the concept of the Hunting Retriever Trials and the llamas would not compete against one another. The first efforts at developing the standard were sent out for input to such noted llama owners as Stanlynn Daugherty, Gwen Ingram, Howard Kerstetter, Jim Krowka, Madeleine & Tom Landis, Jay Rais, Bob Russell, and Daryl Wood to name a few.

With all these contributions, a written standard was developed and first tested at the combined 1995 WILA Jubilee / LANA Expo in Boise. Based on participants feedback, the standard was further refined and again tested at the WILA Packers Rendezvous along the Continental Divide near Salmon, Idaho in June of 1995.

During the winter of 1995-1996, the WILA Packing Committee spent considerable time discussing what the goals were for the Pack Llama Trials. There was a general consensus that they wanted to preserve and promote the pack llama but the details of how to do this were still somewhat fuzzy. Everyone could see the value in some type of data base that would track the performance of pack llamas but were also looking for some way to identify what made a superior one.

Negotiations with ALSA/Testing the Standard

During 1996 three more Pack Trials were held, and the first trial in Oregon was held at Camp Sherman sponsored by WILA, the Central Oregon Llama Association (COLA), and Tom and Madeleine Landis. That summer an article appeared in the ALSA Show Ring magazine asking if ALSA should certify pack llamas. .In November of 1996 WILA met with ALSA in Salt Lake City. WILA briefed them on the PLT and asked if ALSA thought that it was a program they would be interested in administering. ALSA assured WILA that they were interested and that their Performance Committee would contact WILA. At Llama Assembly 97 during the ALSA presentation they were asked by Scott Woodruff if ALSA intended to change the WILA PLT. The answer was that ALSA was going to adopt the WILA program as is.

During 1997 eight trials were held, with first time trials being hosted by the Utah Llama Association in Farmington, Utah; The Classic 2000 in Pocatello, Idaho; LANA in Carson City, Nevada; the Hoosier Llama Association at Salamonie Reservoir, Indiana; Llama Owners of Washington State at Scagit Valley Washington; and, the Llama Association of Southern California at San Dimas, California.

In June of 1997 the chairman of the ALSA Performance Committee was selected to be the one to negotiate with WILA. When WILA received the first ALSA proposal it was a major change from what was presently being done. ALSA's proposal for the trials seemed to be an attempt to combine the WILA PLT with a modified version of existing ALSA halter and pack llama performance classes. This feeling was confirmed by four ALSA members that were shown the proposal to at the ALSA Western Regional Championship in Reno. These were all people that had participated in several WILA PLT, are llama packers, and participate in ALSA shows.

In late October ALSA informed WILA that the negotiations must be completed by the time that the ALSA board met on December 6th, 1997. They wanted to include the new ALSA Pack Performance Trials in the soon the be released ALSA 9th edition handbook. WILA was not willing to rush into all these changes. As the deadline rapidly approached we urged the ALSA Board of Directors (BOD) to contact people that had participated in the WILA PLT to get their input. None of the ALSA BOD had ever even seen a WILA PLT, so there was little common ground for comparison of differing opinions.

Creation of the PLTA 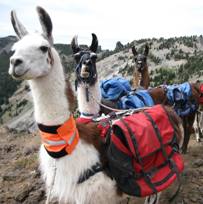 With the break down of negotiations in December of 1997, WILA decided that if the Pack Llama Trials were to continue as they had evolved, a separate organization needed to be formed to administer them. Thus the Pack Llama Trial Association, Inc. (PLTA) was born.

There have been thirteen Pack Llama Trials held since the first one in 1995, with 234 entrants. One hundred sixty six llamas owned by 94 different people from eight states have participated. As of January 1998, WILA had awarded Certificates to seven Basic, one Advanced, and five Master Pack Llamas. The present data base contains information about the performance of 166 llamas at the various WILA Pack Llama Trials.